SIX Group AG announced an all-cash €2.8 billion offer to acquire Spanish exchange operator Bolsas y Mercados Espanoles (BME) on November 18, 2019, setting the stage for SIX to move beyond its Swiss roots to become a Pan-European exchange operator. The combination SIX – owned by a consortium of domestic Swiss and international banks — and BME would create the third largest European exchange and market infrastructure services provider behind Deutsche Bourse and LSE Group.

Euronext confirmed discussions with the Board of Directors of BME and SIX announced its bid for BME shortly thereafter, effectively kicking open the door for a potential bidding war and for other competitors to join the fray. Adding to the drama are rumors that Deutsche Boerse may extend an offer for BME as well, although no formal proposal has of yet been publicly disclosed.

SIX’s offer has been favorably received by BME, which it agrees “reasonably reflects” the value of the exchange operator. If this deal consummates, it would have a fairly small impact on the Global Exchange Industry landscape as a whole but would propel the combined entity to higher market share in Europe. 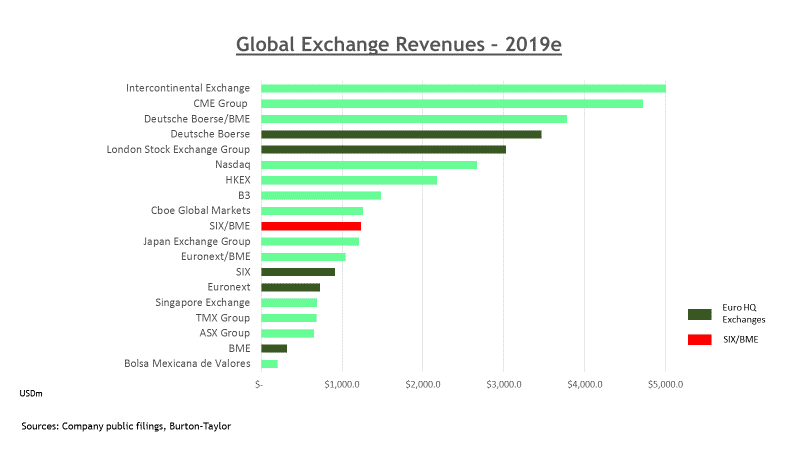 Based on public disclosures to date, it seems as if the deal will move forward with limited opposition from BME, regulators and perhaps most importantly, BME shareholders. Key factors B-T believes will convince impacted parties include:

1.    Strong, all-cash offer. The deal values BME at 9.9 times revenues[1], this in a year where BME revenues are projected to decline by 11.5% from the previous year. The Board of Directors of BME commented that the SIX offer price may “reasonably reflect the current value” of the Company. Less than two weeks ago, Euronext’s CEO stated that Euronext was not in discussions with BME.  Now that discussions are confirmed, Euronext has still not put a formal proposal on the table.

2.    Maintaining the status-quo. B-T expects SIX’s intention to preserve and bolster BME by keeping “a sufficient degree of independence for BME’s business” for at least a 4-year transitional period to be particularly enticing to current management and the Board of Directors of BME.  The optics of retaining jobs in Spain for an interim period in a country with a 14.2% unemployment rate are positives for BME.

3.    Future growth prospects.  An acquisition by SIX would provide BME with a financially stable owner, willing to invest and grow the BME footprint. The acquisition would further bolster SIX’s information services segment, by adding a new stream of market data revenues to its substantial portfolio of financial information and data offerings. It would also expand its ability to offer new index products based on BME’s IBEX indices.

A Look at the Details

BME is facing anemic business conditions this year, with revenues projected to decline by 11.5% in 2019, totaling $317.9 million for the year, driven largely by waning equity trading revenues.  The vast majority of BME revenues come from Spain.

At the same time, SIX Group’s[2] revenues from its exchange and financial information-related activities are projected to total $914.9 million in 2019, down 1.6% from 2018 in USD terms (up 0.1% measured in Swiss Francs).

A combination of the two exchange operators would reach Pro Forma 2019 revenues totaling $1.2 billion, with the largest revenue impact in the Trading, Clearing & Settlement segment, increasing SIX’s existing revenues by more than 35% as it brings equity, fixed income, and derivatives trading revenue to the combined entity. The deal would also further bolster SIX’s information services efforts that include data sold by SIX’s Securities & Exchanges unit as well as data, indices and other services from SIX’s Financial Information unit. The acquisition would give SIX a new data footprint in the EU, and significantly expand its ability to offer Spanish data sets and index products. 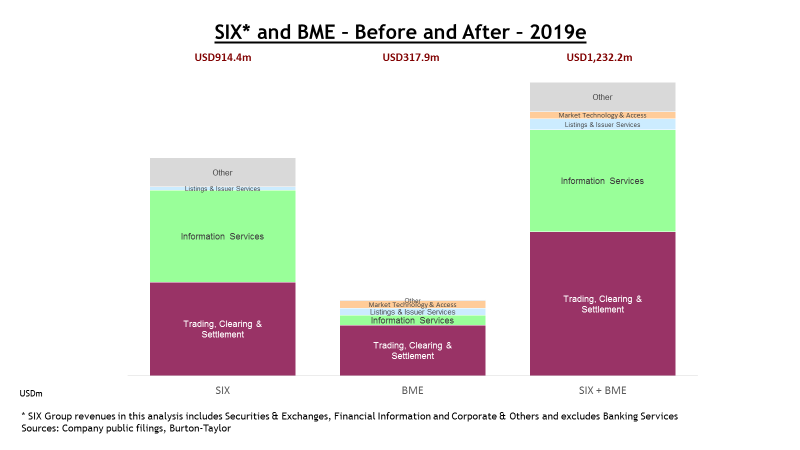 The deal makes strategic sense for both SIX and BME. A merger would diversify SIX’s revenues by expanding its trading, clearing and settlement activities into the European Union while providing BME with a financially stable owner that can invest in the exchange to grow and expand its business.

Given the offer’s attractive valuation and warm reception from BME stakeholders, B-T does not expect a competing offer from Euronext or Deutsche Boerse will materialize with the acquisition expected to proceed to conclusion.

Burton-Taylor offers unique insight into the Global Exchange Industry. Subscribers to Burton-Taylor’s Global Exchange and Index research service get access to our library of content including our annual Global Exchange Benchmark and annual Index Benchmark Reports as well as reports covering industry M&A activity and special reports focusing on specific segments within the industry. Contact info@burton-taylor.com for more information on our subscription packages.

David Tabaka is an Analyst at Burton-Taylor International Consulting, part of TP ICAP group, where he is responsible for research and analysis covering Global Exchanges and Index Providers.

how can we help you?

Contact us at Burton-Taylor or submit a business inquiry online.